Home » Blog » Making The Most Of The Amazon SP-API

Making The Most Of The Amazon SP-API

“Ecommerce isn’t the cherry on the cake, it’s the new cake” – Jean Paul Ago, CEO L’Oreal.

And it takes a ton of grinds for businesses to maintain their tandem with the ever-growing field of e-commerce. Unlike conventional times, online selling has become more complex with time. As modern-day sellers refer to it, ‘experiential buying experience’ has become the crux of the entire e-commerce selling process. E-commerce platforms like Amazon have been exceptionally successful in offering a seamless experience to both – customers and sellers. However, sellers were having a hard time until the introduction of the Amazon Selling Partner API. Previously, sellers relied on the age-old system popularly known as Amazon MWS (marketplace web service) API.

The new Amazon selling partner API is a vast concept for sellers on the platform. It covers major factors such as automated operations, analytics, and seller insights data, as well as an additional suite of APIs, including vendor central. Before we jump straight into the nitty-gritty of what Amazon selling partner API has to offer any business, let’s understand what Amazon MWS offered before the former came into the picture.

What is Amazon MWS? 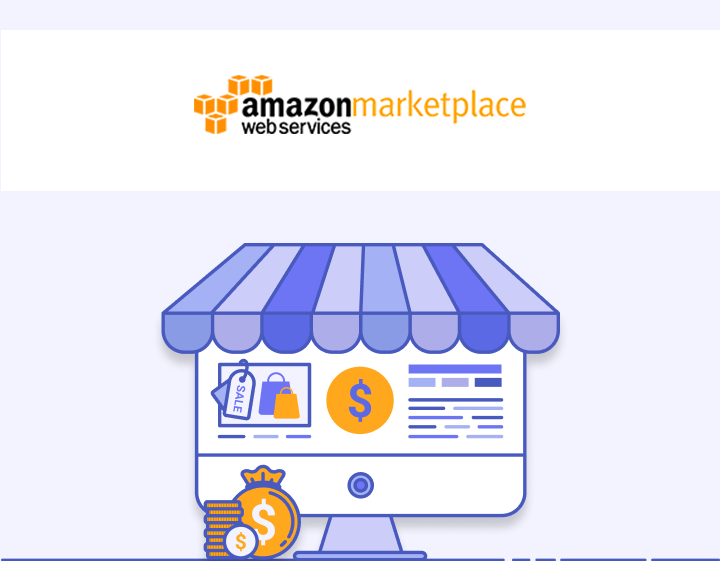 Amazon MWS can be traced back to Jeff Bezos’ famous mandate on building with APIs (application programmable interfaces), which he issued in 2002. However, the complex methods of interacting with it can remain a mystery to even the most experienced sellers. It is, however, worthwhile to learn as much as possible about Amazon MWS and its advantages. APIs are the foundation of Amazon, and if you and your systems are going to get the most out of Amazon data, you or your developers will need to utilize them fully.

Amazon MWS used to assist merchants and vendors in selling on Amazon by sharing data such as orders, payments, and inventory with them automatically. The data integration allowed the automation of a variety of processes. As part of MWS, Amazon provided or still provides several programming interfaces that share relevant data. For more than a decade, Amazon Marketplace Web Service, or MWS, has been the preferred interface for accessing Seller Central and monitoring anything related to the Amazon store. It also includes sending products, managing orders, stocks, and automatic price changes. However, due to the complexity of its usage, an update was required at large.

On a more straightforward note, the acronym for Amazon Marketplace Web Services is Amazon MWS. The Amazon MWS API is a set of APIs that allow sellers to extract data programmatically and perform the majority of the tasks that users carry out through the Amazon Seller Central web interface. What can be the requests that these APIs can handle? Read below:

What Features Does the Amazon MWS Offer? 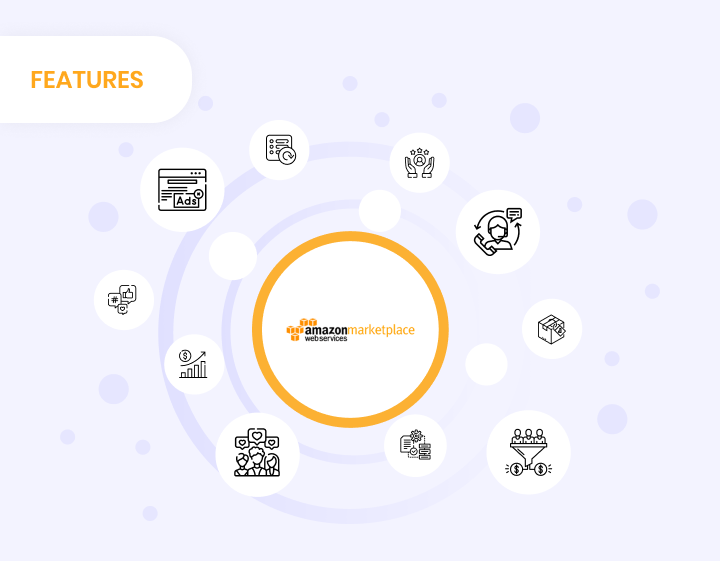 Amazon MWS is designed to help sellers in versatile ways. Sellers with development skills can use the API to integrate listing, order, and payment data into their existing business workflows, allowing them to incorporate Amazon-generated data into their current business practices. If you find yourself doing the same tasks over and over again in the areas of inventory, orders, advertising, or reporting, MWS APIs could boost productivity and save money.

Here is what the Amazon MWS API can help sellers with:

In 2002, Amazon released an early version of MWS. The fact that it has been around for nearly two decades is a testament to how effective it was as a seller’s ally. However, all good things must come to an end to make room for something better. As per the expected 2021 standards, Amazon MWS architecture lags as it relies on SOAP APIs wherein the flat-file downloads too can be called archaic.

Amazon has relied on patching and updates to the MWS APIs to keep up with the sellers’ demands, but it’s time for a change. In the Amazon Seller Marketplace, MWS APIs exchange XML documents and flat-file downloads of critical reports. The current architecture has flaws in several areas, some of which are outlined below:

Only authorized people and programs have access to the data from your seller account and orders, according to Amazon. The company uses an MWS Authorization token to ensure that this is the case. This key is made of numbers, dots, and letters, and it’s valid for a year.

To maintain permanent access, you must update your Amazon MWS Authorization Token regularly. The risk of being left without a valid token is low because Amazon sends weekly email reminders one month before the token expires.

Sadly, when a seller has 100s of seller accounts across multiple marketplaces, the current model for generating MWS Developer tokens is not scalable.

Amazon MWS is an XML-based API, which was pushed aside when JSON-based APIs became more popular over the last decade. In comparison to JSON, XML imposes more structure on every API request, resulting in additional layers of abstraction over HTTP. It’s also static, with non-adjustable rate boundaries. The error-handling procedure is exhaustive. When you send a data file to MWS, you must wait for the processing to finish before it pulls down another file that shows errors on specific lines in the uploaded file.

Rate limiting is required to prevent the systems from being brought down by malicious actors. If it isn’t well-engineered or documented, it may cause dozens of new issues for API users. Anyone who has worked on Amazon MWS APIs will tell you this.

Currently, the APIs only provide data to sellers. Vendors who sell their inventory on Amazon had no choice but to use the user interface to get their reports. If you’re a vendor, having a simple, automated integration with Amazon systems allows you to improve and maintain performance at scale while expanding your business. Unfortunately, vendors have been stuck with manual data processing workflows or complex Amazon Vendor Central EDI documentation and integration.

Why the Change from MWS to Amazon Selling Partner API? 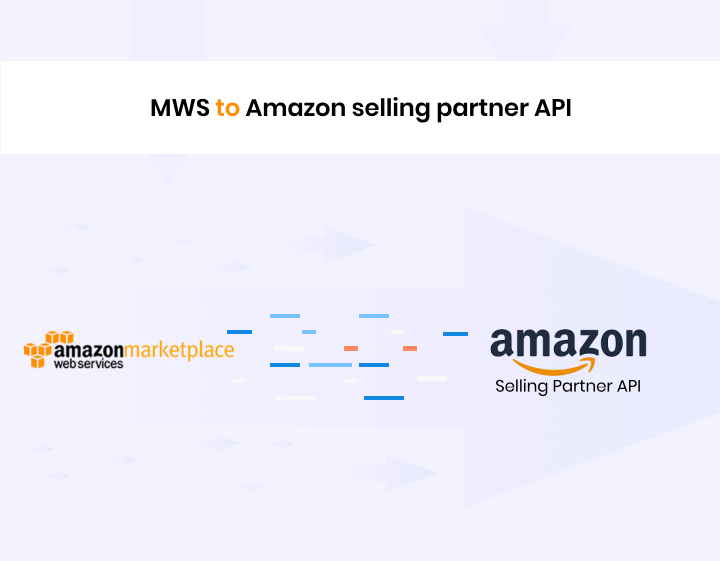 XML is the foundation of Amazon MWS. However, XML’s data throughput and error handling aren’t ideal. As a result, working with this markup language is unusual these days among logisticians and developers. Instead, they use Javascript Object Notation (JSON), and the updated system of Amazon MWS, known as Amazon selling partner API, is based on JSON.

SP-API also has several other benefits, such as authentication and authorization. An Amazon MWS token is no longer required; LWA (Login with Amazon) and Auth2.0 sales partner authorization have taken their place. While MWS has done well, the transition to a more modern approach will be welcome, providing sellers and developers with a more modern set of tools to power e-commerce analytics. Amazon deserves credit for taking the initiative. 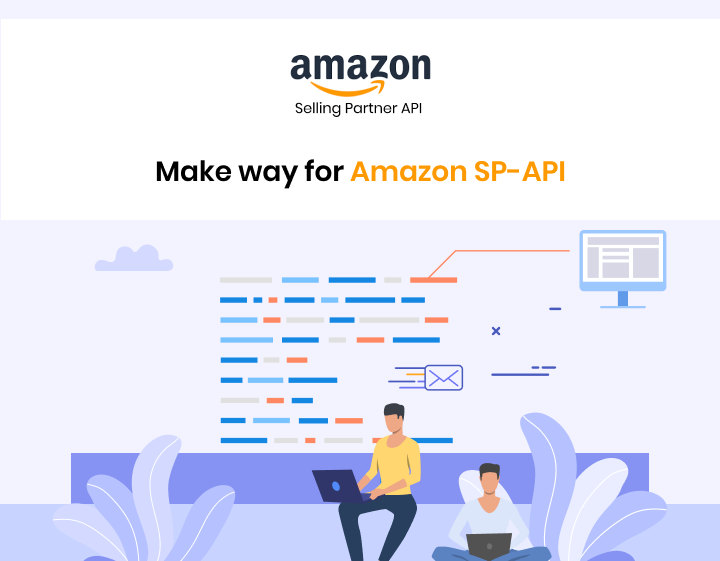 If you’re an Amazon seller or vendor, you’re familiar with the difficulty of accessing your data through MWS’s complex workflows. There’s good news for you – you can now access your data as easily as eating a piece of cake thanks to the Amazon Selling Partner (SP) API.

Selling Partner API (SP-API) is a modernized upgrade that meets today’s developer standards while simplifying migration as much as possible compared to Amazon MWS’s previous API. This new API is live, and it includes all of the features of MWS and a dozen new APIs for Vendor Central.

Amazon selling partner API is also being employed to automate data flow further, sell more efficiently, automate manual processes, gain access to insights and predictions about consumer purchase intentions, reduce advertising costs, and so on. Vendors have had difficult and complex workflows in the past when it came to accessing their data. With the new API, Amazon will directly support Vendor Central. 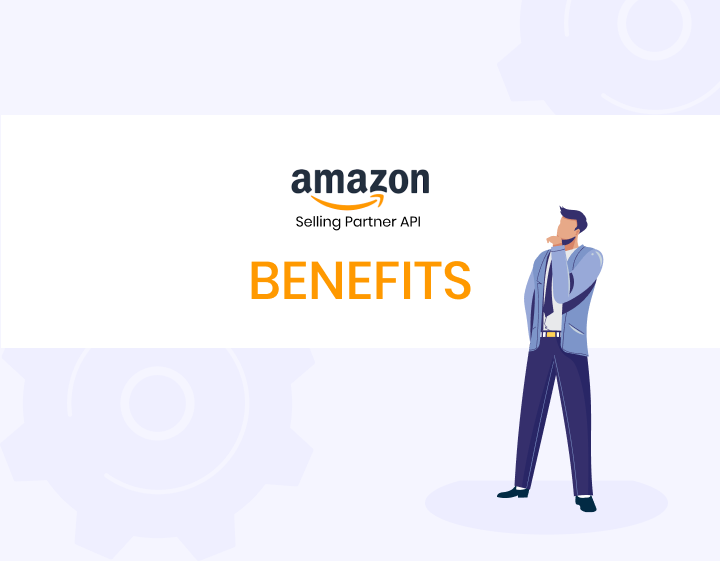 Any Amazon selling partner API developer can be more creative to offer you real-time solutions now than ever before. This marks a vital note towards understanding how Amazon API integrators can be of optimal use after the introduction of Amazon selling partner for sellers. Below are some points on how an expert Amazon API integrator can smoothen your Selling Partner API migration and how the entire SP API can benefit you: 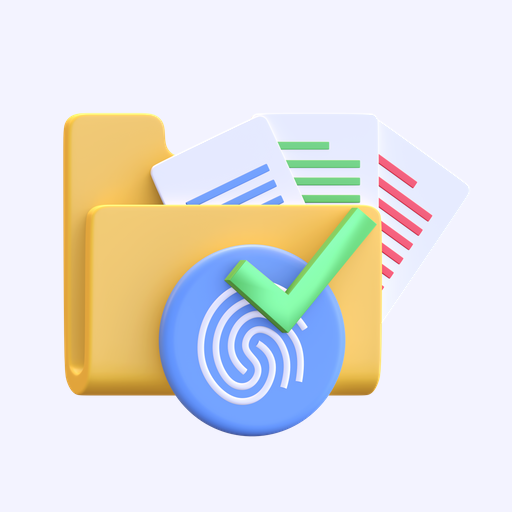 The new Seller Partner API provides direct, programmatic access to your data just the way MWS did. You can gain direct access to the data that powers your e-commerce operations. The SP-API enables you to securely unlock Amazon data silos and integrate them into your private data lake or cloud warehouse using BigQuery, AWS Athena, Azure Data Lake, AWS Redshift, Redshift Spectrum, and Snowflake technologies. You can use tools like Tableau, Microsoft Power BI, Looker, Grow, and others to boost reporting, analytics, and insights once your seller data is unlocked. 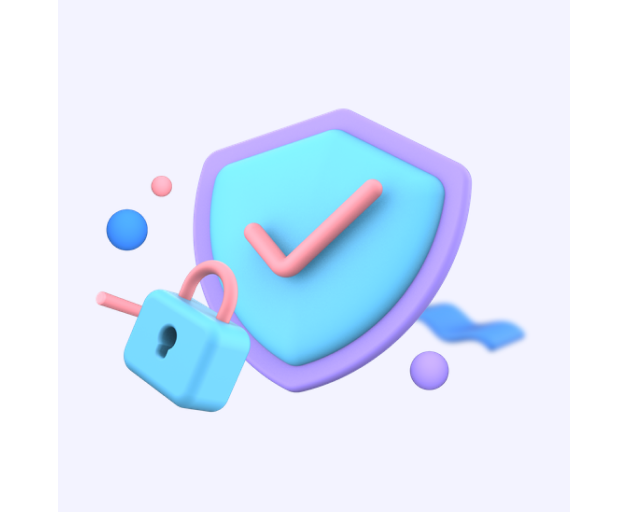 The new Amazon SP-API allows sellers to choose which data they share with apps, enhancing privacy, increasing transparency, and giving sellers more control. Instead of granting single permission to access all of their data when connecting to a new tool, sellers can now grant permissions to only the information they require to get the most value from the app. 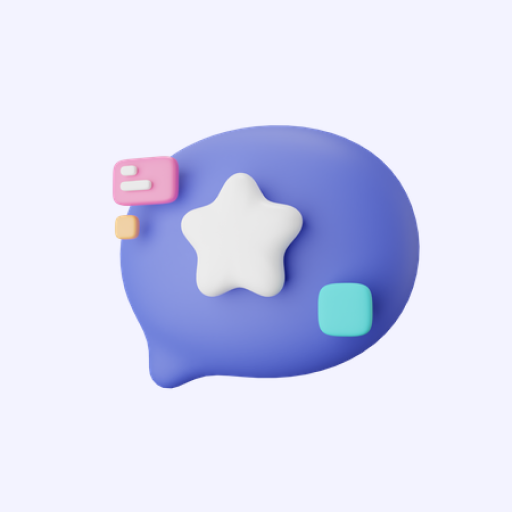 Amazon has never made it easy to ask customers for reviews, and many sellers have had their listings suspended as a result of soliciting reviews in ways that are against Amazon’s TOS. It has finally released a feature that allows sellers to actively ask customers for product reviews and feedback without breaking any rules. However, the procedure is not simple. Only orders completed within the last 5 to 30 days are eligible for review requests.
To do so, log into your Seller Central account, search for relevant orders, fill out each one individually, and manually click the ‘Request Review’ button. The customer will then receive an email from Amazon. 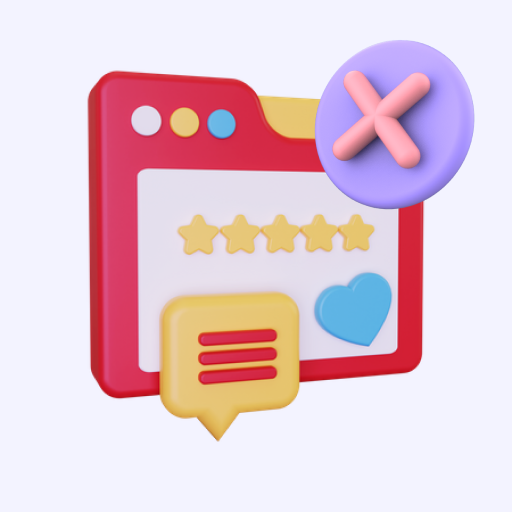 Sellers had no way of contacting customers who left negative feedback on their Amazon storefront until now. It is now possible, but only through the API, not through Seller Central. You can send a request to Amazon via the SP-API using software such as eSellerHub. Amazon will send the customer an email after receiving the request, urging that the feedback be removed from the seller’s storefront. It’s crucial to note that you can only send such a request after you’ve resolved the issue that caused the negative feedback. 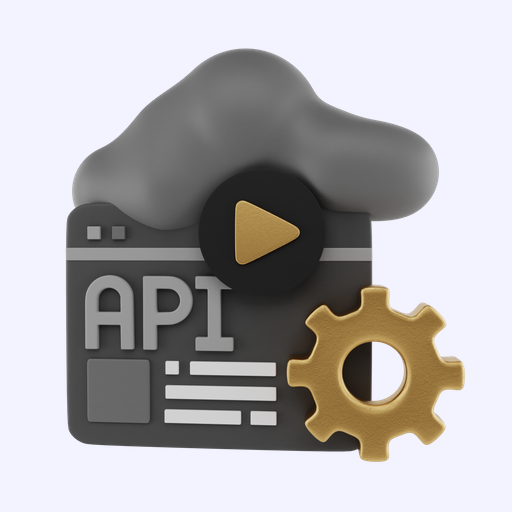 Currently, when requesting data that takes time to receive, developers need to poll the MWS API regularly. With the arrival of the Amazon Selling Partner API, developers only need to make a single request for data, and the API notifies them when it is ready.

We specialize in Amazon Selling Partner API integration and develop comprehensive tools that allow Amazon sellers to uplift their operations with advanced features such as improved privacy control, Ask Reviews, and much more at eSellerHub. Sellers must stand out in this competitive marketplace. As Amazon selling partner API Developers, we help our clients with simple and direct professional Amazon MWS Development solutions with a unique actionable plan personalized to their requirements.

Call us at +1 408 600 0534 or drop an email at contact@esellerhub.com to make your migration from MWS to Amazon selling partner API easier with eSellerHub.